Don’t Roll the Dice with the Wrong Diagnosis: MRI VS MSKUS 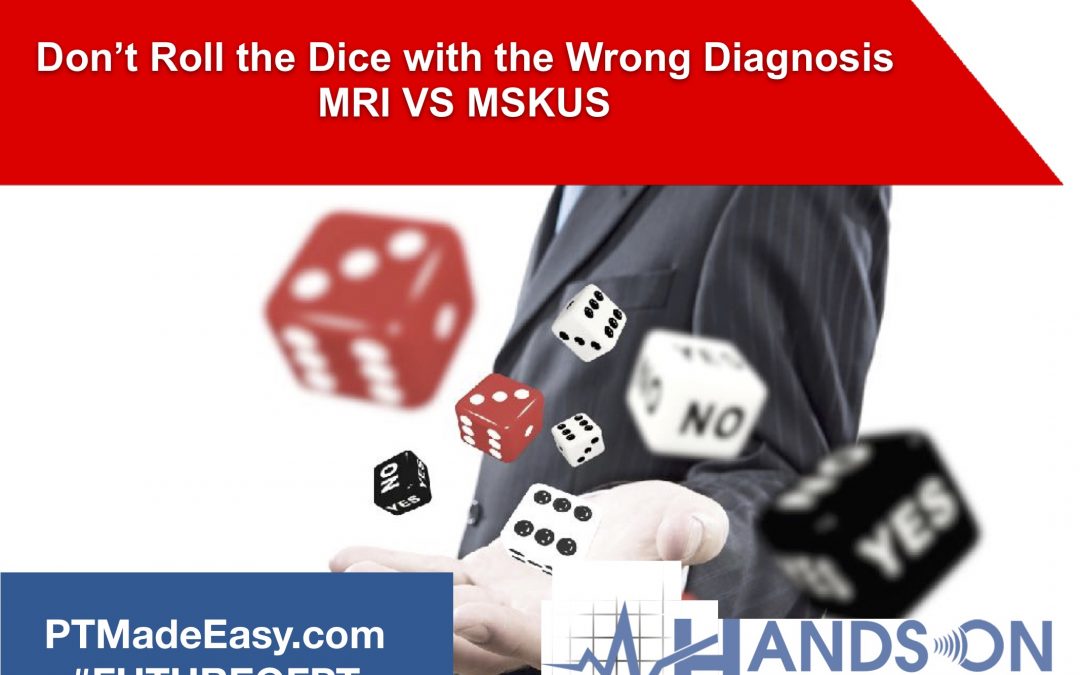 Sometimes accidents lead to painful revelations. Dr. Cindi Prentiss was in a fender bender that led her to an Aha moment as a physical therapist and patient.

After enduring months of pain and uncertainty, a musculoskeletal ultrasound revealed the accurate source of her pain whereas an MRI had been falsely negative. The result?  Cindi endured unnecessary surgery and recovery time – along with a newfound belief in Diagnostics for Physical Therapists.

In May of 2014 while sitting at a red light, I was hit from behind. Jolted, I was confused as to how this could happen, since last I looked, there were cars stopped for what seemed like miles behind me.

For such a minor impact, I couldn’t believe the immediate pain I felt in my neck & left shoulder. After months of physical therapy, massage therapy & acupuncture, my neck felt better yet my shoulder was getting progressively worse. I had an MRI which was reported as negative, yet the orthopedist clinically diagnosed me with a superior labral tear.

I continued to rehab my shoulder but my bicep region was getting more & more painful. I received 2 cortisone guided injections into my bicep which gave me temporary relief for approximately 3-4 weeks each time. It was a year since my car accident & I wasn’t improving. I had limited mobility in my shoulder & began to experience elbow pain due to shoulder compensation.

The doctor wanted to do surgery by year 2. He believed that since the cortisone shots worked, it indicated that a bicep tenodesis would be helpful. He also recommended a sub acromial decompression & posterior capsular release as I lost approximately 50% of my shoulder internal rotation.

I begrudgingly agreed but while awaiting the surgery, my shoulder was getting progressively weaker. The surgeon was puzzled, since the MRI was negative for a tear. Since my symptoms were conflicting with the MRI results, my staff decided to perform an MSKUS to see the cause of the weakness. The result was a supraspinatus & subscapularis tear.

I shared these results with the surgeon; however he was not interested, stating the MRI was negative. The plan was to perform an arthroscopy followed by immediate post-op physical therapy for aggressive stretching, while the anesthetic was still actively working.

“Good news & bad news” were the words I groggily remembered once I was awake in recovery. The good news… you’re alive & the surgery planed was successful. Bad news…”we found a 95% rotator cuff tear & made the decision to repair it with one anchor”.

Post-op plans had significantly changed to include immobilization in airplane splint for the next 8 weeks. No physical therapy was allowed, as per this MD’s protocol, until 8 weeks. What a blow this was. By post-op month 3, I was diagnosed with post-op adhesive capsulitis.

By post-op month 6 the doc wanted to perform a manipulation under anesthesia as my ROM was less than before the surgery!

Moral of the story, MSKUS revealed the true condition of my shoulder, as x-ray vision would have! MRI was falsely negative & resulted in a surgery that ended in a non-optimal way. Would this have been the surgery of choice knowing what we knew in hind-sight?

Here’s To Your Continued Success,

PS If you would like to offer patients a much more accurate diagnosis while dramatically increasing your revenues, schedule a free strategy session: